In 2017 The Ville Resort – Casino in Townsville, owned by the Australian family-run Morris Group, underwent a massive $45 million renovation. Directitude Management, based in Sunbury, Victoria, headed by David Miller, were the Project and Construction Managers to oversee this rebuild. A significant portion of the rebuild was the hard and soft landscaping which was awarded to Sariascape Retaining Walls & Paving, owned and managed by Andrew Tulloch out of Cairns.

The renovation was not only to revitalise and modernise the Resort and Casino, but to bring to life the restaurants, bars, pool area, open lawns and Pavilion Function Rooms overlooking Magnetic Island, bringing them up to a Five Star, World Class standard and a destination within itself.

The entry, an undercover Porte Cochère, where you’re greeted by the Resort Concierge before walking up wide open stairs into the foyer and reception, along with a wheelchair ramp access, was to be a mix of pavers and terrazzo tiles.

The client did not want a standard or run of the mill paver installed, they were after a paver that was unique, had colours to reflect the new aspect of the Resort, and would also blend in with the exposed timber cladding of the buildings. They also needed the pavers to be durable to heavy foot traffic, which would flow from the drop off and pick-up area where vehicle traffic was to be constant, in total an area of 300 plus m2.

The rear area of the Resort – Casino that is set amongst tropical landscaped gardens and boasts stunning views of Magnetic Island and the Coral Sea consists of approx. 1400m2 of hardscape to be the same paver colour as the Porte Cochère, but of a different shape or size. This paved area formed a mixture of the main entry to the Resort area consisting of the new pool, swim up bar and Splash Bar, an outside eating area for The Palm House, a buffet restaurant serving both breakfast and dinner, the gymnasium and The Pavilion which can cater up to 1,000 people theatre style, or 600 banquet style.

All these areas lead down onto the Poolside Lawns, with Crazy Pave Stone surrounding which can accommodate up to 2,000 people marquees, cocktail events and other light foot traffic events. There were also a mix of steps and landings involved with a large circular area designed for the end of The Pavilion as a feature.

To find a paver to meet all the requirements, suit the environment and traffic, match the mix of exposed timber, stone work and tropical plants, and hadn’t been used in this part of the country was a challenge. However, a 20 year relationship between Andrew Tulloch and Mark Wilson of Adbri Masonry Contracting opened up conversations between the them and Directitude Management.

Both Andrew and Mark were given colours to work toward and paver sizes required. Samples were produced, including those with a “Pencil Nose” finish for steps. As the pavers were subject to the weather and North Queensland wet season they also had to be slip resistant. Following months of samples, Mark and his team at Adbri produced a Euro paver in both the 600x400x40mm and 400x400x40mm for the Pavilion and Palm House area, along with the 400x400x50mm for the Porte Cochère. The pavers were honed and lightly shotblast to meet the slip resistance and the new, custom colour was named “Fleece”. David Miller and the client agreed with this new look and it was accepted to proceed with the paver.

Another challenge with using this paver was the large circular area, consisting of three landings with external curves at the end of The Pavilion, as well as an internal curved corner with three landings. These areas were originally designed to be either coloured concrete poured in-situ or large moulded concrete pieces placed in. Directitude Management discussed a desire to maintain the same product throughout these areas, so long as it could be done keeping the curve of the front edge of the tread, leading into the rise whilst keeping perpendicular lines.

There was a great deal of consultation between Sariascape, Adbri Contracting and Joe Powell of The Ville. Amongst many attempted trials, they used a local stone cutting business which was able to cut curves into the paver with a water jet at a very high psi, which seemed to work and after determining a speed to cut at, they were able to achieve a paver with a smooth cut face for the front of the tread. The next step was to determine the correct radius for each landing at the outside edge, plus the width of each landing which would give an exact measurement for every paver on these landings to be individually cut and create the look wanted while maintaining the same product throughout the whole project.

The colour of the Paver specifically designed for this project and the size and shapes used have created a whole new look for the Resort, commencing in the Porte Cochère entry, flowing through the open Foyer and Reception of the Resort, out on to the Quarterdeck down stairs. Using this Adbri product on to the Pavilion and Palm House area, along with the logistic of the project being in Townsville and the production in Brisbane, this particular paver has been an integral part of the renovation. 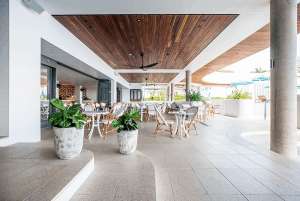 Since completion, The Ville Resort – Casino renovation won the award for the Best Redeveloped Accommodation Hotel Resort at the QHA Awards for Excellence in 2019.

This selection helps us to optimise your viewing experience, providing you with information and product relevant to your state.

Adbri Masonry products are manufactured and sold in Australia.
For commercial and infrastructure sales inquiries in the Pacific Islands or South East Asia.

For all other regions, please consult a local concrete paving manufacturer.